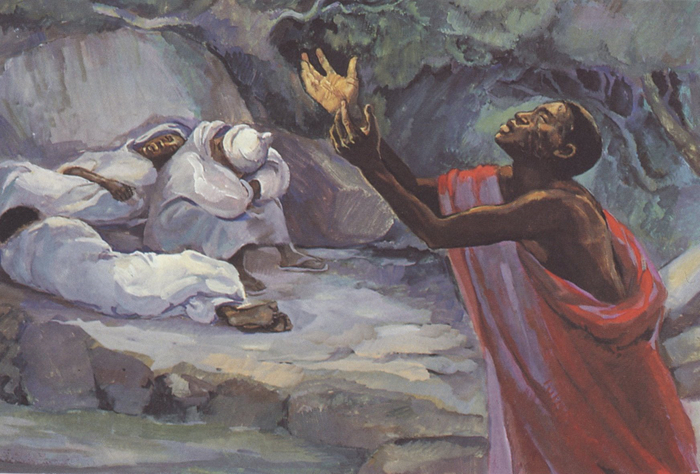 **Originally preached for Journey at College of Charleston on April 4, 2019**

When Colin gave me the scripture passage for this week, he warned me, “It’s a long one, but don’t feel too overwhelmed!” When I read through the full passage, I wrote back and said, “Oh it’ll be totally fine, this passage contains one of my favorite moments in all of scripture: Jesus trembling in the garden.”

I suspect that scene isn’t a particularly common choice for “favorite Bible story”—the Son of God, savior of the world, on the ground, crying, trembling in fear, hoping against hope for a way out of the road that lies ahead for him. And I’ll take it a step further and tell you that my favorite Jesus-quote comes not too long after this moment.
“Eloi, Eloi, lama sabachthani?”

I was born a God-squad kid. There’s a term in the Presbyterian church—Cradle Presbyterian—which means, as you might have guessed, that someone has essentially been Presbyterian since the day they were born. I don’t super love this term because it’s most often used as a marker of elite status, superiority—thrown out in a carelessly condescending and alienating way. But, in my case, it also happens to be true.

I don’t remember a time before faith was a part of my life. I grew up memorizing bible verses that my grandmother wrote down on index cards, and writing love songs to Jesus on the back of my church bulletin. I went to a super Christian summer camp started by the guy who founded Chick-fil-a. Youth Group and summer mission trips were my life.

I did go through a period of rejecting organized religion my freshman year of college, but when I finally showed up to the Presbyterian Student Center at UGA as a sophomore, I declared myself official unofficial fellowship director by my second week—a position which became actually official when I became the first student minister for fellowship a year later.

I don’t say all of this to brag or convince you of how great a Christian I am. I say it to give you context for what came next. See I had spent my entire life seeing faith as a given, until my early 20s. I was 1000 miles from home, without any sort of faith community, and doubts that I had never really given the time of day before were getting louder and louder. I began to seriously question whether God actually cared about me or any of us, but more than that—I doubted that God existed at all.

These doubts weren’t fleeting. They were consuming. In a life in which the presence of God had always been an assumed truth, it was overwhelming to suddenly reckon with the idea of God not existing at all. I felt like my doubts owned me—like they were the truth I didn’t want to know, and my faith was the lie. I was deeply terrified by the thought that God didn’t exist. But I was also terrified by the fact that I was having doubts at all. It felt wrong. Shameful.

This painful season went on for years, and more days than not, I found myself crying—sobbing—but only in the shower. It’s like I didn’t want anyone else to see or hear or know this terrible secret. I was a Christian who didn’t believe in God. Or at least, I was a Christian who wasn’t sure if I believed in God anymore.

Perhaps others—even you—might have felt alarmed at this admission from a working pastor. But you know what I felt? Free. Comforted. Hopeful.

This pastor, Joseph, made me feel like I might survive my doubts for the first time, not by him dismissing them, but by him admitting that he could relate.

And this. THIS. Is why Jesus in the Garden is one of my favorite stories in the Bible. Jesus trembling. Jesus scared. Jesus begging “take this cup from me.” He gets it.

The title of this sermon is “Did Jesus Doubt?” because Colin told me it had to be a question, but I think the answer is an emphatic yes. Perhaps not the existence of God, but certainly as he asks “let this cup be taken from me” he seems to be wracked with doubt and fear about God’s plan. And when he cries out on the cross, he certainly seems to be doubting that God is with him.

What is both remarkable and devastating about this is that Jesus has all the evidence in the world of God’s presence and wisdom and power. Jesus has not only been present for all of the gospel miracles—he literally performed them! He’s felt the power of God flow through him. Heck, he is God!

But in that Garden on that dark and terrible night, he is also just… very human. And afraid. And unsure.

My theology professor in seminary explained to us that the power of Jesus’ death and resurrection is that Jesus ensures and demonstrates that there is nowhere we can go—not even into death itself—where God is not with us. And that is powerful.

But the truth is that we can’t truly understand what death is in this lifetime. It remains always a little bit abstract. But doubt—in my experience, doubt is one of the most godforsaken places we can ever find ourselves. I have never felt more alone than in my season of deep doubt. But the gospel truth revealed to us in this story is that Jesus even knew that human experience, and that means even in our places of deepest doubt—even doubt about whether God exists at all, through Jesus, God is with us. Even there. We are never ever abandoned.

It’s good news because it means that what happens next—when Judas’ seeds of doubt and greed lead him to deadly betrayal, and when Peter’s doubt and fear lead him to devastating denial—Jesus doesn’t just forgive them, he also understands. And when he commends his spirit to God and dies for them and us, it isn’t because he is just so perfectly, unquestioningly certain—it’s because he knows what it’s like not to be. He doesn’t need us to be perfect to love us. He loves us in our humanity because he knows what it is to be human too.

This story is also good news because in Jesus, we find an example of what to do with our doubt. In the garden he says, “‘Abba, Father, for you all things are possible; remove this cup from me.” But then, in the same breath he says, “But not my will, but yours be done.” See he doesn’t deny his doubt and fear. He doesn’t dismiss it. He doesn’t even really get over it… as we see on the cross. But he chooses to hand it back to God. He chooses to trust even as he trembles. He walks forward with his faith in one hand, and his doubt in the other.

The Christian writer Anne Lamott has a famous quote that goes, “The opposite of faith isn’t doubt. It’s certainty.” In Jesus we have a teacher who shows us what that means in action.

A show called The West Wing aired in the late 90s and early 2000s and depicted a fictional American president and his staff. In one episode, one of his staffers is suffering the effects of PTSD after having been shot earlier in the season. Eventually his symptoms affect his work and wellbeing enough that his boss forces him to spend an entire day talking to a therapist. The staffer finally leaves late that night, long after the work day has ended, and finds his boss still there, waiting for him. And when the staffers asks why, his boss tells him this story:

“This guy’s walking down the street when he falls in a hole. The walls are so steep he can’t get out.

“A doctor passes by and the guy shouts up, ‘Hey you. Can you help me out?’ The doctor writes a prescription, throws it down in the hole and moves on.

“Then a priest comes along and the guy shouts up, ‘Father, I’m down in this hole can you help me out?’ The priest writes out a prayer, throws it down in the hole and moves on

“Then a friend walks by, ‘Hey, Joe, it’s me can you help me out?’ And the friend jumps in the hole. Our guy says, ‘Are you stupid? Now we’re both down here.’ The friend says, ‘Yeah, but I’ve been down here before and I know the way out.’”

Jesus is fully divine, but he also willingly and with love enters into the darkest holes of human experience. He trembles in the garden, confronts real fear and doubt and questions and desperation and despair. He gets down in that hole to be with us—so that we are never alone and so that he can show us the way out. Radical solidarity.

In Jesus, we see an example of what to do in the face of our own doubts, but we also get an example of how to show up for each other. When Jesus faces the night before his death and a reckoning with his own fears and uncertainties, he asks his friends to stay awake with him. It isn’t until they’ve fallen asleep on him that he becomes truly overwhelmed. And on the cross when he asks “My God, my God, why have you forsaken me” we know that God hasn’t forsaken him, but basically everyone else has.

In a recent podcast reflecting on that line, my friend and UMC Deacon M Barclay points this out and says, “The felt absence of God is our own turning away from each other.” I think M is making a profound observation.

We need each other. We need the comfort of one another’s presence in the dark hole moments of life. In the presence of others we find reassurance of the presence of God. And our presence does the same of the people we show up for. Later in the podcast, M goes on to say “When we speak of the promises of God, we are making promises to each other.”

Faith is a communal act. And this is why that’s important. This is why it’s important that we are a part of faith communities. Because when we are overcome by doubt, when we cannot find it in ourselves to belief, our siblings and our community believe for us.

In the “take this cup from me” dark garden moments of life, we say to each other, “I cannot take it away from you—but I can stay awake with you. You are not alone.”

We don’t always get it right and we don’t always show up for each other as we should—like Peter and the other disciples, we are deeply imperfect creatures. But the promise of a resurrection faith is that there’s always another chance. And as we stumble along trying to trust in God and show up for one another, Jesus walks with us. In the hope and love, in the faith and solidarity, in the fear and trembling, even in the doubt. Jesus gets it. And Jesus walks with us. And that is good, good news. Amen.

I am an author, poet, journalist, public speaker, and an ordained minister. Here you can find links to my latest published work, recent sermons, my collection of poetry, and details on hiring me for weddings, freelance writing, and speaking opportunities.

My work focuses on the intersections of faith, politics, advocacy, and culture — with a particular emphasis on sexuality and gender justice. I believe that we are called to hold on to both our convictions and our relationships, which requires not unity, but authenticity.